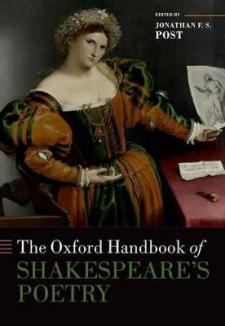 The Oxford Handbook of Shakespeare's Poetry

The Oxford Handbook of Shakespeare's Poetry contains thirty-eight original essays written by leading Shakespeareans around the world. Collectively, these essays seek to return readers to a revivified understanding of Shakespeare's verbal artistry in both the poems and the drama. The volume understands poetry to be not just a formal category designating a particular literary genre but to be inclusive of the dramatic verse as well, and of Shakespeare's
influence as a poet on later generations of writers in English and beyond. Focusing on a broad set of interpretive concerns, the volume tackles general matters of Shakespeare's style, earlier and later; questions of influence from classical, continental, and native sources; the importance of words, line, and rhyme
to meaning; the significance of songs and ballads in the drama; the place of gender in the verse, including the relationship of Shakespeare's poetry to the visual arts; the different values attached to speaking 'Shakespeare' in the theatre; and the adaptation of Shakespearean verse (as distinct from performance) into other periods and languages. The largest section, with ten essays, is devoted to the poems themselves: the Sonnets, plus 'A Lover's Complaint', the narrative poems, Venus and
Adonis and The Rape of Lucrece, and 'The Phoenix and the Turtle'. If the volume as a whole urges a renewed involvement in the complex matter of Shakespeare's poetry, it does so, as the individual essays testify, by way of responding to critical trends and discoveries made during the last three
decades.