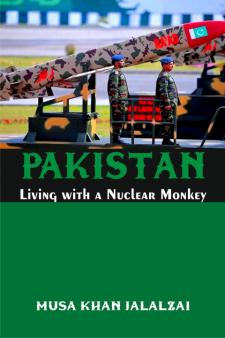 "Pakistan is teetering on the brink. The country's staggering and lurching foreign policy has failed to evolve with changing political and geopolitical developments. The army and ISI lack coherent and long-term national security approach. The prolixity of the Afghan war and participation of Pakistan's jihadist black-water in it has blighted its social and political stratification. Its domestic policies are in a grief-stricken state. The two states (Islamic Republic and Military Establishment) have adopted different foreign, domestic and economic policies, and view neighbouring states with different glasses. The gradual radicalization of Pakistan army and its links with worldwide terrorist organizations over the last 70 years, poses a grave danger to the country's nuclear installations in terms of insider attacks. The spectrum of rogue and radicalized elements range from military officers to employees of Strategic Planning Division and officers of nuclear force.
These aspects have been elaborated by the author in this book. The book can be an essential reading for every reader interested in Pakistan’s nuclear program and its threat of falling into hands of rogue elements."