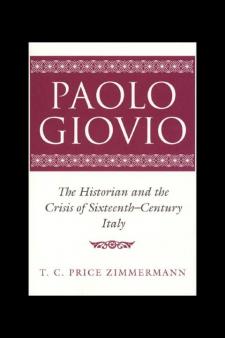 Best-known for his sweeping narrative Histories of His Own Times and for his portrait museum on Lake Como, the Italian bishop and historian Paolo Giovio (1486-1552) had contact with many of the protagonists of the great events he so vividly described--the wars of France, Germany, and Spain, and the sack of Rome. He used the information he gleaned from his contacts to carry on an extensive correspondence that became a kind of proto-journalism. With his interests in history, literature, geography, exploration, medicine, and the arts, this man reflects almost the entire spectrum of High Renaissance civilization. In a biography surveying both Giovio's life and his works, T. C. Price Zimmermann examines the historian as a figure formed by fifteenth-century humanism who was caught in the changing temper of the Counter Reformation.Giovio's Histories remained a widely used account of the wars of Italy for nearly two hundred and fifty years, although his objectivity was often questioned owing to the patronage he received. Following Burckhardt, who began to restore Giovio's reputation more than a century ago, Zimmermann reveals a conscientious, independent-minded historian and an astute commentator on the entire Mediterranean world, the first to integrate the contemporary history of the Muslim nations with that of Europe, east and west. The book also stresses the important contributions Giovio made to the ethos of the Renaissance through his biographies and famous portrait museum, both tributes to the emerging sense of individual human personality.