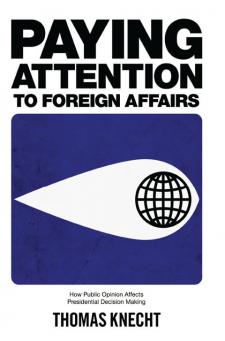 Do American presidents consider public opinion when making foreign policy decisions? In a democracy, it is generally assumed that citizen preferences inform public policy. For a variety of reasons, however, foreign policy has always posed a difficult challenge for democratic governance. In Paying Attention to Foreign Affairs, Thomas Knecht offers new insights into the relationship between public opinion and U.S. foreign policy. He does so by shifting our focus away from the opinions that Americans hold and toward the issues that grab the public’s attention. Policy making under the glare of public scrutiny differs from policy making when no one is looking. As public interest in foreign policy increases, the political stakes also rise. A highly attentive public can then force presidents to choose foreign policies that are less politically risky but usually less effective. By tracking the ebb and flow of public attention to foreign policy, this book offers a method of predicting when presidents are likely to lead, follow, or simply ignore the American public.