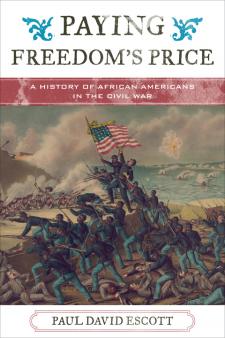 Paying Freedom's Price provides a comprehensive yet brief and readable history of the role of African Americans—both slave and free—from the decade leading up to the Civil War until its immediate aftermath. Rather than focusing on black military service, the white-led abolitionist movement, or Lincoln’s emergence as the great emancipator, Escott concentrates on the black military and civilian experience in the North as well as the South. He argues that African Americans—slaves, free Blacks, civilians, soldiers, men, and women— played a crucial role in transforming the sectional conflict into a war for black freedom. The book is organized chronologically as well as thematically. The chronological organization will help readers understand how the Civil War evolved from a war to preserve the Union to a war that sought to abolish slavery, but not racial inequality. Within this chronological framework, Escott provides a thematic structure, tracing the causes of the war and African American efforts to include abolition, black military service, and racial equality in the wartime agenda. Including a timeline, selected primary sources, and an extensive bibliographic essay, Escott’s book will be provide a superb starting point for students and general readers who want to explore in greater depth this important aspect of the Civil War and African American history.