The Peace of the Gods 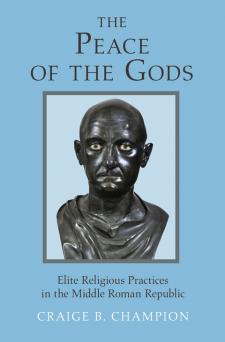 The Peace of the Gods takes a new approach to the study of Roman elites' religious practices and beliefs, using current theories in psychology, sociology, and anthropology, as well as cultural and literary studies. Craige Champion focuses on what the elites of the Middle Republic (ca. 250–ca. 100 BCE) actually did in the religious sphere, rather than what they merely said or wrote about it, in order to provide a more nuanced and satisfying historical reconstruction of what their religion may have meant to those who commanded the Roman world and its imperial subjects. The book examines the nature and structure of the major priesthoods in Rome itself, Roman military commanders' religious behaviors in dangerous field conditions, and the state religion's acceptance or rejection of new cults and rituals in response to external events that benefited or threatened the Republic. According to a once-dominant but now-outmoded interpretation of Roman religion that goes back to the ancient Greek historian Polybius, the elites didn't believe in their gods but merely used religion to control the masses. Using that interpretation as a counterfactual lens, Champion argues instead that Roman elites sincerely tried to maintain Rome's good fortune through a pax deorum or "peace of the gods." The result offers rich new insights into the role of religion in elite Roman life.