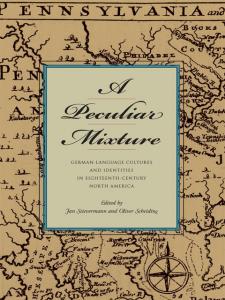 Through innovative interdisciplinary methodologies and fresh avenues of inquiry, the nine essays collected in A Peculiar Mixture endeavor to transform how we understand the bewildering multiplicity and complexity that characterized the experience of German-speaking people in the middle colonies. They explore how the various cultural expressions of German speakers helped them bridge regional, religious, and denominational divides and eventually find a way to partake in America’s emerging national identity. Instead of thinking about early American culture and literature as evolving continuously as a singular entity, the contributions to this volume conceive of it as an ever-shifting and tangled “web of contact zones.” They present a society with a plurality of different native and colonial cultures interacting not only with one another but also with cultures and traditions from outside the colonies, in a “peculiar mixture” of Old World practices and New World influences.