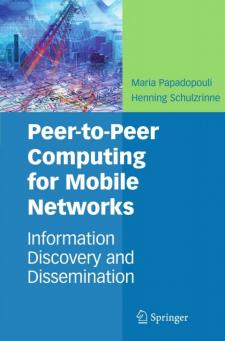 &quote;This world! This small world the great!&quote; Odysseus Elytis 1. 1 Wireless data communications In the 19th century, the advent of the telegraph and telephone forever changed how messages were transmitted around the world. Radio, television, c- puters, and the Internet further revolutionized communication in the 20th 1 century. Equally important, the e?ect of Moore's law is transforming a niche technology into a ubiquitous one, expanding the innovations in an increasingly networked world. Wireless devices are becoming smaller, easier to use and p- vasive. In e?ect, people are depending more and more on wireless information wherever they are. At the dawn of the 21st century, pervasive computing weaves itself into our lives [352, 6, 4, 29, 42, 48, 23, 50, 47, 38, 19, 22, 18]. Today people access local and international news, tra?c or weather - ports, sports, maps, guide books, music, video ?les and games via the Int- net [27, 52]. Data volume-medical data, personal multimedia, surveillance for urban areas, web data-is exploding. Similarly, the importance of meta-data, i. e. , semantic annotations of what this data means, is also rapidly growing. Analysts expect the growth in mobile location-based services in the European market to reach 622 million euros in 2010, estimating that 18 million users in Europe will subscribe to location-based billing plans by then.