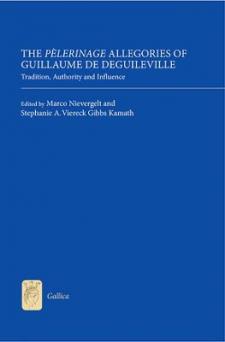 The fourteenth-century French pilgrimage allegories of Guillaume de Deguileville (or "Digulleville") shaped late medieval and early modern European culture. Portions of the Pelerinage de Vie Humaine, Pelerinage de l'Ame and Pelerinage de Jhesucrist survive in more than eighty medieval manuscripts and translations into English, German, Dutch, Castilian and Latin appeared by the early sixteenth century, along with adaptations into French prose and dramatic forms and numerous early printed editions.
This volume furnishes a better understanding of the allegories' circulation, creation and importance from the 1330s into the 1560s, via trans-national, multilingual and interdisciplinary perspectives. The collection's first section, on "Tradition", identifies the patterns that developed as Deguileville's corpus captured the attentions of adaptors, annotators and illustrators. The second section, on "Authority", addresses the cultural context of Deguileville himself, his approach to poetic craft and the status of his French and Latin poetry. The third section, on "Influence", closely examines selected connections between the Pelerinages and the literary productions of later authors, translators and reading communities, including the French verse of Philippe de Mezieres, Castilian print adaptation, and the early modern Croatian novel. Overall, the collection provides a variety of approaches to examining literary reception, attending not only to texts but also to evidence of surviving manuscripts and early printed editions; it offers new insights into a rich and complex allegorical corpus and its impact on European literary history.

Marco Nievergelt is a Maitre-Assistant in Early English Literature in the English department of the University of Lausanne.Stephanie A. Viereck Gibbs Kamath studies English and French medieval literature, with a particular interest in allegory, translation studies, and the history of the material text.