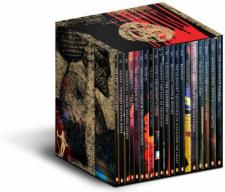 View every book in the Penguin Epics series.

This beautiful limited edition boxed set contains the stunningly designed new Penguin Epics series: twenty short tales of human adventure, legend and myth. Penguin Epics depict the most extreme acts of heroism, ambition, bravery and violence, and in doing so they reveal mankind's most profound aspirations and darkest fears. From the rip-roaring exploits of Alexander the Great, through Dante's terrifying description of the Descent into Hell, to the swashbuckling adventures of Sindbad, these works will take the reader on a journey through the most astonishing and heroic legends of the past four-and-a-half thousand years of literature.

"The Epic of Gilgamesh"

"The Sea, The Sea"
Xenophon

"The Abduction of Sita"

"Jason and the Golden Fleece"
Apollonius

"The Destruction of Troy"
Virgil

"The Fall of Jerusalem"
Josephus

"The Madness of Nero"
Tacitus

"The Legendary Adventures of Alexander the Great"

"Sagas and Myths of the Northmen"

"The Descent into Hell
"Dante

"The Voyages of Sindbad"

@UrukRockCity All the ladies want to get it on now that I've slain the demon. But I must decline. I'm a clean man these days.
I just can't win with women. Before, nailing all the ladies was bad. Now I refuse to seduce, and the Gods send a giant bull to kill me?
From