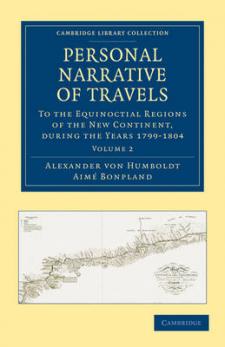 The Prussian naturalist Alexander von Humboldt (1769-1859) was one of the most famous explorers of his generation. Charles Darwin called him 'the greatest scientific traveller who ever lived'. In 1799, Humboldt and the botanist Aime Bonpland secured permission from the Spanish crown for a voyage to South America. They left from Madrid and spent five years exploring the continent. Humboldt reported his findings in a total of thirty volumes, published in French over a period of more than twenty years beginning in 1805. This English translation by Helen Maria Williams of one important component of Humboldt's account, the Relation historique du voyage (1814-1825), consists of seven volumes and was published in London between 1814 and 1829. Volume 2 (1814) contains extensive physical observations of latitude, longitude, weather conditions and ocean temperature recorded during the voyage, and describes the expedition's arrival in Venezuela.