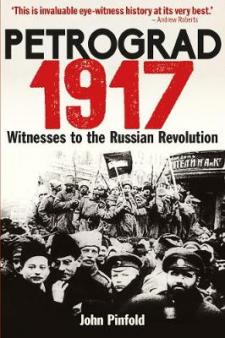 `It's damned hard lines asking for bread and only getting a bullet!'

The dramatic and chaotic events surrounding the Russian Revolution have been studied and written about extensively for the last hundred years, by historians and journalists alike. However, some of the most compelling and valuable accounts are those recorded by eyewitnesses, many of whom were foreign nationals caught in Petrograd at the time.

Drawing from the Bodleian Library's rich collections, this book features extracts from letters, journals, diaries and memoirs written by a diverse cast of onlookers. Primarily British, the authors include Sydney Gibbes, English tutor to the royal children, Bertie Stopford, an antiques dealer who smuggled the Vladimir tiara and other Romanov jewels into the UK, and the private secretary to Lord Milner in the British War Cabinet. Contrasting with these are a memoir by Stinton Jones, an engineer who found himself sharing a train compartment with Rasputin, a newspaper report by governess Janet Jeffrey who survived a violent confrontation with the Red Army, and letters home from Labour politician, Arthur Henderson.

Accompanied by seventy contemporary illustrations, these first-hand accounts are put into context with introductory notes, giving a fascinating insight into the tumultuous year of 1917.