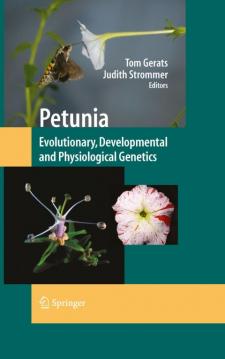 Petunia belongs to the family of the Solanaceae and as such is closely related to important crop species like tomato, potato, eggplant, pepper and tobacco. With around 35 species described it is one of the smaller genera and among those there are two groups of species that make up the majority of them: the purple flowered P.integrifolia group and the white flowered P.axillaris group. It is assumed that interspecific hybrids between members of these two groups have laid the foundation for the huge variation in cultivars as selected from the 1830’s onwards. Petunia thus has been a commercially important ornamental since the early days of horticulture. Despite that, Petunia was in use as a research model only parsimoniously until the late fifties of the last century. By then seed companies started to fund academic research, initially with the main aim to develop new color varieties. Besides a moment of glory around 1980 (being elected a promising model system, just prior to the Arabidopsis boom), Petunia has long been a system in the shadow. Up to the early eighties no more then five groups developed classical and biochemical genetics, almost exclusively on flower color genes. Then from the early eighties onward, interest has slowly been growing and nowadays some 20-25 academic groups around the world are using Petunia as their main model system for a variety of research purposes, while a number of smaller and larger companies are developing further new varieties. At present the system is gaining credibility for a number of reasons, a very important one being that it is now generally realized that only comparative biology will reveal the real roots of evolutionary development of processes like pollination syndromes, floral development, scent emission, seed survival strategies and the like. As a system to work with, Petunia combines advantages from several other model species: it is easy to grow, sets abundant seeds, while self- and cross pollination is easy; its lifecycle is four months from seed to seed; plants can be grown very densely, in 1 cm2 plugs and can be rescued easily upon flowering, which makes even huge selection plots easy to handle. Its flowers (and indeed leaves) are relatively large and thus obtaining biochemical samples is no problem. Moreover, transformation and regeneration from leaf disc or protoplast are long established and easy-to-perform procedures. On top of this easiness in culture, Petunia harbors an endogenous, very active transposable element system, which is being used to great advantage in both forward and reverse genetics screens. The virtues of Petunia as a model system have only partly been highlighted. In a first monograph, edited by K. Sink and published in 1984, the emphasis was mainly on taxonomy, morphology, classical and biochemical genetics, cytogenetics, physiology and a number of topical subjects. At that time, little molecular data was available. Taking into account that that first monograph will be offered electronically as a supplement in this upcoming edition, we would like to put the overall emphasis for the second edition on molecular developments and on comparative issues. To this end we propose the underneath set up, where chapters will be brief and topical. Each chapter will present the historical setting of its subject, the comparison with other systems (if available) and the unique progress as made in Petunia. We expect that the second edition of the Petunia monograph will draw a broad readership both in academia and industry and hope that it will contribute to a further expansion in research on this wonderful Solanaceae.