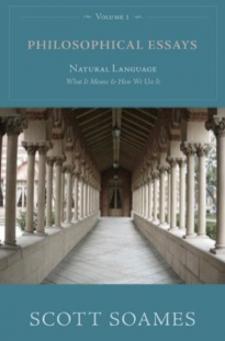 The two volumes of Philosophical Essays bring together the most important essays written by one of the world's foremost philosophers of language. Scott Soames has selected thirty-one essays spanning nearly three decades of thinking about linguistic meaning and the philosophical significance of language. A judicious collection of old and new, these volumes include sixteen essays published in the 1980s and 1990s, nine published since 2000, and six new essays. The essays in Volume 1 investigate what linguistic meaning is; how the meaning of a sentence is related to the use we make of it; what we should expect from empirical theories of the meaning of the languages we speak; and how a sound theoretical grasp of the intricate relationship between meaning and use can improve the interpretation of legal texts. The essays in Volume 2 illustrate the significance of linguistic concerns for a broad range of philosophical topics--including the relationship between language and thought; the objects of belief, assertion, and other propositional attitudes; the distinction between metaphysical and epistemic possibility; the nature of necessity, actuality, and possible worlds; the necessary a posteriori and the contingent a priori; truth, vagueness, and partial definition; and skepticism about meaning and mind. The two volumes of Philosophical Essays are essential for anyone working on the philosophy of language.