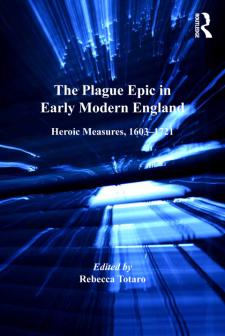 The Plague Epic in Early Modern England: Heroic Measures, 1603-1721 presents together, for the first time, modernized versions of ten of the most poignant of plague poems in the English language - each composed in heroic verse and responding to the urgent need to justify the ways of God in times of social, religious, and political upheaval. Showcasing unusual combinations of passion and restraint, heart-rending lamentation and nation-building fervor, these poems function as literary memorials to the plague-time fallen. In an extended introduction, Rebecca Totaro makes the case that these poems belong to a distinct literary genre that she calls the 'plague epic.' Because the poems are formally and thematically related to Milton's great epics Paradise Lost and Paradise Regained, this volume represents a rare discovery of previously unidentified sources of great value for Milton studies and scholarly research into the epic, didactic verse, cultural studies of the seventeenth century, illness as metaphor, and interdisciplinary approaches to illness, natural disaster, trauma, and memory.