Playing the King: Lope de Vega and the Limits of Conformity 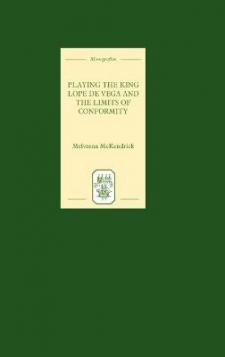 This book offers a radical re-evaluation of Lope's theatre, which will affect the way in which the comedia in general is read. It spans Lope's literary career, discussing (pseudo-)historical, tragic and peasant plays in order to show Lope's texts as complex negotiations between author and public, between conservatism and subversion, between representations of the ideal of kingship and its political reality, in a period of social and political change. Drawing on contemporary Spanish political philosophy, McKendrick shows that far from glorifying monarchy and advocating absolutism (the orthodox view in the Hispanic world), Lope's political plays constitute an informed critiqueof kingship; she also challenges the received wisdom that the comedia was an instrument of stage and that its playwrights were the conscious propagandists of an aristocratic elite. With the help of insights and models provided by the speech act theory, the stratagems and techniques utilised by Lope to follow the path of prudence between the acceptable and the unacceptable in political commentary in the commercial theatre are scrutinised, illustrating how richly nuanced texts produce not an ideologically monolithic and complacent drama but one which is at once politically anxious and probing.
MELVEENA MCKENDRICK is Professor of Spanish Literature, Culture and Societyat the University of Cambridge.