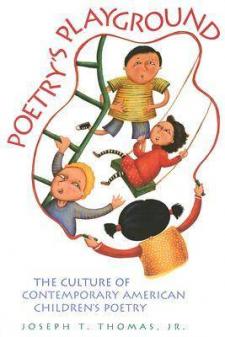 While the study of children's poetry has always had a place in the realm of children's literature, scholars have not typically considered it in relation to the larger scope of contemporary poetry. In this volume, Joseph T. Thomas, Jr., explores the ""playground"" of children's poetry within the world of contemporary adult poetic discourse, bringing the complex social relations of play and games, cliques and fashions, and drama and humor in children's poetry to light for the first time. ""Poetry's Playground"" considers children's poetry published in the United States from the mid-twentieth century onward, a time when many established adult poets began writing for young audiences. Through the work of major figures like Robert Frost, Gwendolyn Brooks, Carl Sandburg, Randall Jarrell, Theodore Roethke, Shel Silverstein, and Jack Prelutsky, Thomas explores children's poems within the critical and historical conversations surrounding adult texts, arguing at the same time that children's poetry is an oft-neglected but crucial part of the American poetic tradition. Canonical issues are central to ""Poetry's Playground."" The volume begins by tracing Robert Frost's emergence as the United States' official school poet, exploring the political and aesthetic dimensions of his canonization and considering which other poets his canonization pushed aside. The study also includes a look at eight major anthologies of children's poems in the United States, suggesting a descriptive canon that will be invaluable to future scholarship. Additionally, ""Poetry's Playground"" addresses poetry actually written and performed by children, exploring the connections between folk poetry produced both on playgrounds and in the classroom. ""Poetry's Playground"" is a groundbreaking study that makes bold connections between children's and adult poetry. This book will be of interest to poets, scholars of poetry and children's literature, as well as students and teachers of literary history, cultural anthropology, and contemporary poetry.