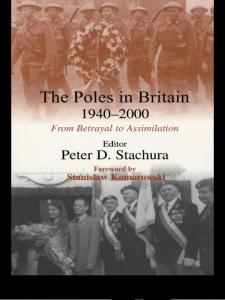 Stachura provides an important, original analysis of the Polish community in the United Kingdom, adding up to a provocative interpretation of the Pole's position in British society. The chapters add to our understanding of the significant Polish military effort alongside the Allies in defeating Nazi Germany, while the appalling price the Poles paid at the end of the war at the Yalta Conference is accentuated. This crass and wholly unjustified betrayal of the cause of a free Poland by the Allies resulted directly in the formation of a large Polish community in Britain.