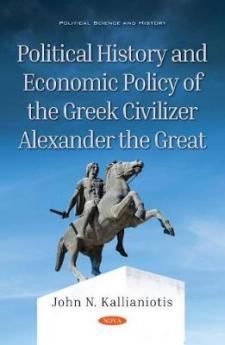 This book deals with Alexanders the Great ( ; 356-323 B.C.) campaign in Asia and measures his revenues and expenses during these wars by taking information from different historians of his time and it uses the current value of gold to translate these measurements in U.S. dollar. Alexander had to exercise an efficient and effective public policy (revenue and spending) for his vast Empire and to satisfy all his citizens as a Hellenic civilizer and not as a conqueror. The book examines the Hellenic values, which made Alexander one of the most important people in human history. He was a student of the greatest of philosophers Aristotle ( ) and for this reason he had shown outstanding management and military capabilities used even today my military schools. His efficiencies with rates of salaries, health and welfare, building projects, supplies, transports, reforms of the tax system, indirect taxes and donations, loans, minting of coins; even his dealing with financial scandals and other actions are information useful for our policy makers, today. The book presents also Alexanders contribution to the world as the greatest civilizer and preparer of the ground for the expected Unknown God. Alexanders political history and economic policy is very useful for our current leaders and scholars (historians, political scientist, economists, generals, and others). Further, the current politics of the region are covered to give to the reader a better idea of the true history of the glorious past and the strange (suspicious) conflicts of the present. Finally, some useful information on numismatics (currency, coins, and their values) from his time is given, so we can compare prices, wages, and exchange rates with respect of the U.S. dollar and the Greek drachma.