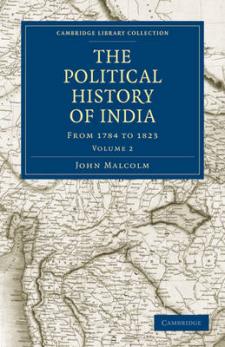 Sir John Malcolm (1769-1833) was a diplomat and administrator in India. He arrived there in 1783 as a cadet in the East India Company, was quickly promoted, and soon moved into political and diplomatic roles where his linguistic skills proved extremely useful. In 1799 he was dispatched to Persia by Lord Wellesley, and concluded two important treaties. He returned to India in 1801 and towards the end of his career became the governor of Bengal (1827-1830). He wrote several books on India and Persia, including this two-volume history, published in 1826, which documents the period Malcolm himself had spent in India. In Volume 2, Malcolm considers the changing nature of Britain's control in India, and in later chapters reflects on the type of governance that developed, examining the roles of governor-general and the issue of crime and justice, as well as observing the British community more widely.