Politics And Economic Development In Nigeria 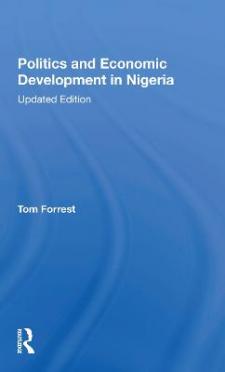 Since the end of civil war in 1970, Nigeria has struggled to build a stronger federal center and to reduce conflicts resulting from uneven development and from ethnic, regional, class, and religious differences. This book provides a comprehensive account of the dynamic interplay between the political and economic forces that have shaped government policies, institutions, and the patterns of development in Africa's most populous country. Tom Forrest identifies the major issues and challenges in Nigerian politics, giving particular attention to the evolution of the federal system, aspects of political competition, and the nature of ruling groups. He examines the links among political demands and incentives, economic strategy, and capitalist development and analyzes the evolution of economic policy and performance, looking specifically at the impact of large oil revenues, agrarian policies, and the program of economic liberalization. In a completely new chapter for this edition, Forrest examines the annulment of the presidential elections in 1993 and explores the persistence of military rule, the demise of the economic reform program, and the intensification of the economic crisis. Assessing the prospects for economic and political change, Forrest considers whether enough political coherence and legitimacy at the center can be reestablished to allow for effective economic management and more productive use of oil wealth in the years ahead.