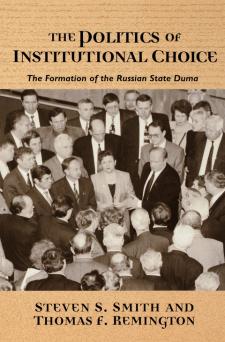 Events in Russia since the late 1980s have created a rare opportunity to watch the birth of democratic institutions close at hand. Here Steven Smith and Thomas Remington provide the first intensive, theoretically grounded examination of the early development of the State Duma, the lower house of the Russian Federation's parliament created by the 1993 constitution. They offer an integrated account of the choices made by the newly elected members of the Duma in establishing basic operating arrangements: an agenda-setting governing body, a standing committee system, an electoral law, and a party system. Not only do these decisions promise to have lasting consequences for the post-communist Russian regime, but they also enable the authors to test assumptions about politicians' goals from the standpoint of institutional theory. Smith and Remington challenge in particular the notion, derived from American contexts, that politicians pursue a single, overarching goal in the creation of institutions. They argue that politicians have multiple political goals--career, policy, and partisan--that drive their choices. Among Duma members, the authors detect many cross currents of interests, generated by the mixed electoral system, which combines both single-member districts and proportional representation, and by sharp policy divisions and an emerging party system. Elected officials may shift from concentrating on one goal to emphasizing another, but political contexts can help determine their behavior. This book brings a fresh perspective to numerous theories by incorporating first-hand accounts of major institutional choices and placing developments in their actual context.