The Politics of Moral Sin 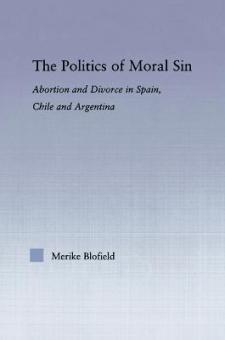 This book analyzes the problems that arise when women's rights conflict with the views of conservative organized religion.

Specifically, it addresses the legalization - or lack thereof - of divorce and abortion in three recently democratized Catholic countries: Spain, Chile, and Argentina. Offering a vital and timely contribution to political debates on democratic consolidation, social policy, gender, politics and religion, it challenges many of the accepted assumptions and conclusions in these fields, arguing that to understand the political dynamics and policy trajectories on these issues we must first analyze the distribution of both economic and political power. Merike Blofield moves the debate away from a (unitary) focus on values and public opinion to an analysis of how economic, social and political structures give certain actors more power than others. The topics covered should appeal to a broad readership interested in the difficulties of democratic consolidation in Latin America, and the obstacles to social policy reform in a region with such high levels of inequality. The analysis presented in The Politics of Moral Sin also deepens our understanding of why and how European countries have been so successful in limiting the indulgence of organized religion and in promoting women's rights.