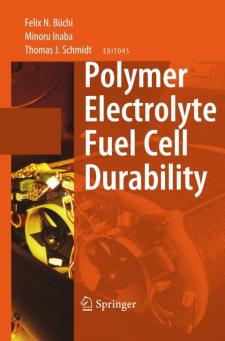 This book covers a significant number of R&D projects, performed mostly after 2000, devoted to the understanding and prevention of performance degradation processes in polymer electrolyte fuel cells (PEFCs). The extent and severity of performance degradation processes in PEFCs were recognized rather gradually. Indeed, the recognition overlapped with a significant number of industrial dem- strations of fuel cell powered vehicles, which would suggest a degree of technology maturity beyond the resaolution of fundamental failure mechanisms. An intriguing question, therefore, is why has there been this apparent delay in addressing fun- mental performance stability requirements. The apparent answer is that testing of the power system under fully realistic operation conditions was one prerequisite for revealing the nature and extent of some key modes of PEFC stack failure. Such modes of failure were not exposed to a similar degree, or not at all, in earlier tests of PEFC stacks which were not performed under fully relevant conditions, parti- larly such tests which did not include multiple on-off and/or high power-low power cycles typical for transportation and mobile power applications of PEFCs. Long-term testing of PEFCs reported in the early 1990s by both Los Alamos National Laboratory and Ballard Power was performed under conditions of c- stant cell voltage, typically near the maximum power point of the PEFC.