Pop Culture in North Africa and the Middle East 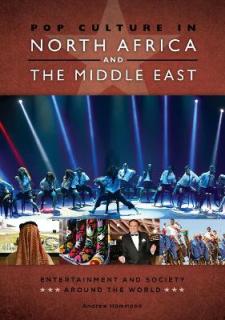 Ideal for students and general readers, this single-volume work serves as a ready-reference guide to pop culture in countries in North Africa and the Middle East, covering subjects ranging from the latest young adult book craze in Egypt to the hottest movies in Saudi Arabia.

Part of the new Pop Culture around the World series, this volume focuses on countries in North Africa and the Middle East, including Algeria, Egypt, Iran, Iraq, Israel, Jordan, Kuwait, Lebanon, Libya, Morocco, Saudi Arabia, Syria, the United Arab Emirates, and more. The book enables students to examine the stars, idols, and fads of other countries and provides them with an understanding of the globalization of pop culture.

An introduction provides readers with important contextual information about pop culture in North Africa and the Middle East, such as how the United States has influenced movies, music, and the Internet; how Islamic traditions may clash with certain aspects of pop culture; and how pop culture has come to be over the years. Readers will learn about a breadth of topics, including music, contemporary literature, movies, television and radio, the Internet, sports, video games, and fashion. There are also entries examining topics like key musicians, songs, books, actors and actresses, movies and television shows, popular websites, top athletes, games, and clothing fads and designers, allowing readers to gain a broad understanding of each topic, supported by specific examples. An ideal resource for students, the book provides Further Readings at the end of each entry; sidebars that appear throughout the text, providing additional anecdotal information; appendices of Top Tens that look at the top-10 songs, movies, books, and much more in the region; and a bibliography.

Provides information that students can use in daily life, such as renting a popular or acclaimed Middle Eastern film or watching a YouTube video of Egyptian music