The Popularization of Malthus in Early Nineteenth-Century England 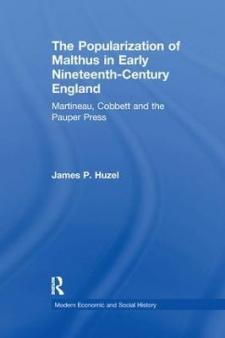 The political economist Thomas Robert Malthus (1766-1834) has gained increasing and deserved scholarly attention in recent years. As well as the republication of his works and letters, a rich body of scholarship has been produced that enlightens our understanding of his thoughts and arguments. Yet little has been written on the ways in which his message was translated to, and interpreted by, a popular audience. Malthus first rose to prominence in 1798 with the publication of his Essay on the Principle of Population, in which he blamed rising levels of poverty on the inability of Britain's economy to support its growing population. His remedy, to limit the number of children born to poor families, outraged many social reformers, most notably William Cobbett, but found a ready audience in other quarters, Harriet Martineau, among others, being a famous Malthusian advocate. In this new study of Malthus and the impact of his writings, James Huzel shows how, by being both popularized and demonized, he framed the terms of reference for debate on the problems of pauperism and became the beacon against which all proposals seeking to remedy the problem of poverty had to be measured. It is argued that the New Poor Law of 1834 was deeply influenced by Malthusian ideals, replacing the traditional sources of outdoor relief with the humiliation of the workhouse. Dealing with issues of social, economic and intellectual history this work offers a fresh and insightful investigation into one of the most influential, though misunderstood, thinkers of the late eighteenth and early nineteenth centuries and concludes that Malthus was perhaps even more important than Adam Smith and David Ricardo in fostering the rise of a market economy. It is essential reading for all those who wish to reach a fuller understanding of how the tremendous social and economic upheavals of the Industrial Revolution shaped the development of modern Britain.