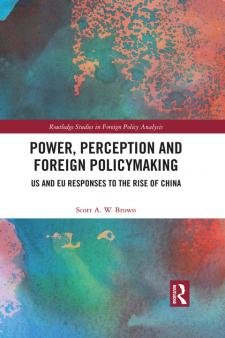 This book examines the changing dynamics of power in the international arena since the end of the Cold War. Brown engages in analysis of how the United States and the European Union have responded to the so-called rise of China through an examination of how policymakers’ perceptions of China have changed over time and influenced their policy choices. This study undertakes rigorous analysis of how these perceptions have evolved between 1989 and 20092016, offering a comparative perspective on the similarities and differences between the policy discourse and behaviour within these two Western powers. Brown argues that ‘China’s rise’ is a contested notion, with varied perceptions of how the implications of China’s ascendancy have shaped policy preferences in ways that are inconsistent with concerns over the threat of an impending power-transition. Combining concepts and methods derived from IR and FPA, the book examines the linkages between great power politics and policymakers’ competing interpretations of key international actors, and their influence upon foreign policies. The main objective of the study is to illuminate the different ways in which the US and the EU have responded to the rise of China through a close analysis of their decision-making processes and outcomes across a series of key encounters and events, including the transatlantic debate over the EU’s proposal to lift its China arms embargo (2003-2005). Undertaking qualitative analysis of the development of American and European policymakers’ perceptions of China, this book will be of interest to graduates and scholars of post-Cold War international politics, Foreign Policy Analysis, policymaking, US-China relations and EU-China relations.