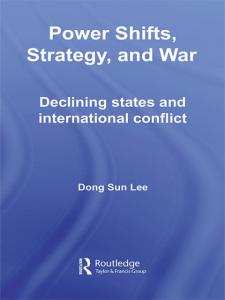 Marked changes in the balance of power between states in the international system are generally seen by IR scholars as among the most common causes of war. This book explains why such power shifts lead to war breaking out in some cases, but not in others. In contrast to existing approaches, this book argues that the military strategy of declining states is the key determinant of whether power shifts result in war or pass peacefully. More specifically, Dong Sun Lee argues that the probability of war is primarily a function of whether a declining state possesses a ‘manoeuvre strategy’ or an ‘attrition strategy’. The argument is developed through the investigation of fourteen power shifts among great powers over the past two centuries. Shifts in the balance of power and the attendant risks of war remain an enduring feature of international politics. This book argues that policymakers need to understand the factors influencing the risk of war as a result of these changes, in particular the contemporary shifts in power resulting from the rise of China and from the growth of nuclear proliferation.