The Practical Import of Political Inquiry 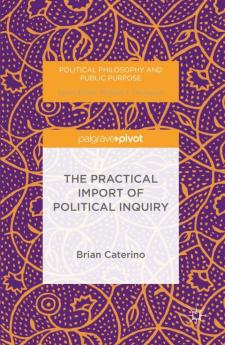 This book examines a basic problem in critical approaches to political and social inquiry: in what way is social inquiry animated by a practical intent? This practical intent is not external to inquiry as an add-on or a choice by the inquirer, but is inherent to the process of inquiry. The practical intent in inquiry derives from the connection between social inquiry and the participant’s perspective. The social inquirer, in order to grasp the sense of those who are the subject of inquiry, has to adopt the perspective of the participant in the social world. Caterino opposes the view that research is an autonomous activity distinct from or superior to a participant’s perspective. He argues that since the inquirer is on the same level as the participant, all inquiry should be considered mutual critique in which those who are addressed by inquiry have an equal right and an equal capacity to criticize addressors.