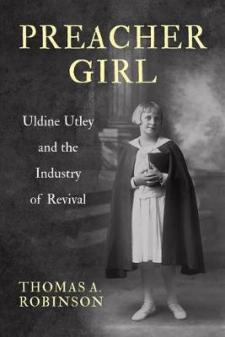 Uldine Utley defined the ""girl evangelist"" of the 1920s and 1930s. She began her preaching career at age eleven, published a monthly magazine by age twelve, and by age fourteen was regularly packing the largest venues in major American cities, including Carnegie Hall and Madison Square Garden. She stood toe to toe with Billy Sunday and Aimee Semple McPherson, the most famous revivalist preachers of the day. She became a darling of the secular press and was mimicked and modeled in fiction and plays.

In Preacher Girl, the first full biography of Utley, author Thomas Robinson shows that Utley's rise to fame was no accident. Utley's parents and staff carefully marked out her path early on to headline success. Not unlike Hollywood, revivalism was a business in which celebrity equaled success. Revivalism mixed equal parts of glamour and gospel, making stars of its preachers. Utley was its brightest.

But childhood fame came at a price. As a series of Utley's previously unpublished poems reveal, after a decade of preaching, she was facing a near-constant fight against physical and mental exhaustion as she experienced the clash between the expectations of revivalism and her desires for a normal life. Utley burned out at age twenty-four. The revival stage folded; fame faded; only a broken heart and a wounded mind remained.

Both Utley's meteoric rise and its tragic outcome illuminate American religion as a business. In his compelling chronicle of Utley's life, Robinson highlights the surprising power of American revivalism to equal Hollywood's success as well as the potentially devastating private costs of public religious leadership. The marketing and promotion machine of revivalism brought both fame and hardship for Utley - clashing by-products in the business of winning souls for Christ.