Presidents and the Dissolution of the Union 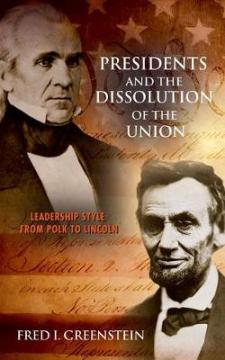 The United States witnessed an unprecedented failure of its political system in the mid-nineteenth century, resulting in a disastrous civil war that claimed the lives of an estimated 750,000 Americans. In his other acclaimed books about the American presidency, Fred Greenstein assesses the personal strengths and weaknesses of presidents from George Washington to Barack Obama. Here, he evaluates the leadership styles of the Civil War-era presidents. Using his trademark no-nonsense approach, Greenstein looks at the presidential qualities of James K. Polk, Zachary Taylor, Millard Fillmore, Franklin Pierce, James Buchanan, and Abraham Lincoln. For each president, he provides a concise history of the man's life and presidency, and evaluates him in the areas of public communication, organizational capacity, political skill, policy vision, cognitive style, and emotional intelligence. Greenstein sheds light on why Buchanan is justly ranked as perhaps the worst president in the nation's history, how Pierce helped set the stage for the collapse of the Union and the bloodiest war America had ever experienced, and why Lincoln is still considered the consummate American leader to this day.
Presidents and the Dissolution of the Union reveals what enabled some of these presidents, like Lincoln and Polk, to meet the challenges of their times--and what caused others to fail.