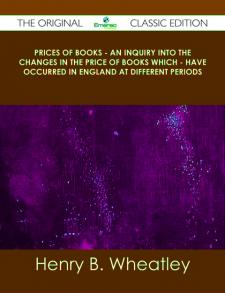 Finally available, a high quality book of the original classic edition of Prices of Books - An Inquiry into the Changes in the Price of Books which - have occurred in England at different Periods. It was previously published by other bona fide publishers, and is now, after many years, back in print.

This is a new and freshly published edition of this culturally important work by Henry B. Wheatley, which is now, at last, again available to you.

Get the PDF and EPUB NOW as well. Included in your purchase you have Prices of Books - An Inquiry into the Changes in the Price of Books which - have occurred in England at different Periods in EPUB AND PDF format to read on any tablet, eReader, desktop, laptop or smartphone simultaneous - Get it NOW.

Enjoy this classic work today. These selected paragraphs distill the contents and give you a quick look inside Prices of Books - An Inquiry into the Changes in the Price of Books which - have occurred in England at different Periods:

We are told that, “to prevent the discovery of them, when the army was Northwards, he packed them in several trunks, and, by one or two in a week, sent them to a trusty friend in Surrey, who safely preserved them, and when the army was Westward, and fearing their return that way, they were sent to London again; but the collector durst not keep them, but sent them into Essex, and so according as they lay near danger, still by timely removing them at a great charge, secured them, but continued perfecting the work.”

...Charles to gett for his present use, a pamphlet which his M?tie had then occasion to make use of, and not meeting with it, they both came to me, having heard that I did employ my selfe to take up all such things, from the beginning of that Parlement, and finding it with me, tould me it was for the King’s owne use, I tould them all I had were at his M?ties command and service, and withall tould them if I should part with it and loose it, presuming that when his M?tie had done with it, that little account would be made of it, and so I should loose by that losse a limbe of my collection, which I should be very loth to do, well knowing it would be impossible to supplie it if it should happen to be lost, with which answer they returned to his M?tie at Hampton Court (as I take it) and tould him they had found that peece he so much desired and withall how loath he that had it, was to part with, he much fearing its losse; whereupon they were both sent to me againe by his M?tie to tell me that upon the worde of a Kinge (to use their own expressions) he would safely returne it, thereuppon immediately by them I sent it to his M?tie, who having done with it, and having it with him when he was going towards the Isle of Wight, let it fall in the durt, and then callinge for the two persons before mentioned (who attended him) delivered it to them, with a charge, as they would answer it another day, that they should both speedily and safely return it to him, from whom they had received it, and withall to desire the partie to goe on and continue what had begun, which book together with his M?ties signification to me by these worthy and faithfull gentlemen I received both speedily and safely.

...When Lord Treasurer Harley recommended Queen Anne to purchase Sir Symonds d’Ewes’ manuscripts as the richest collection in England after Sir Robert Cotton’s, and to present them to a public library, the Queen answered, “It was no virtue for her, a woman, to prefer, as she did, arts to arms; but while the blood and honour of a nation were at stake in her wars, she could not, till she had secured her living subjects an honourable peace, bestow their money upon dead letters.”