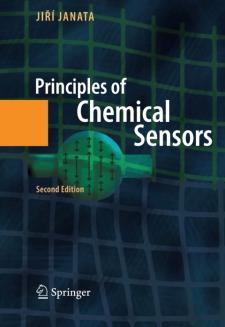 Do not learn the tricks of the trade, learn the trade I started teachinggraduate coursesin chemical sensors in early 1980s, ?rst as a o- quarter (30 h) class then as a semester course and also as several intensive, 4–5-day courses. Later I organized my lecture notes into the ?rst edition of this book, which was published by Plenum in 1989 under the title Principles of Chemical Sensors. I started working on the second edition in 2006. The new edition of Principles of Chemical Sensors is a teaching book, not a textbook. Let me explain the difference. Textbooks usually cover some more or less narrow subject in maximum depth. Such an approach is not possible here. The subject of chemical sensors is much too broad, spanning many aspects of physical and analytical chemistry, biochemistry, materials science, solid-state physics, optics, device fabrication, electrical engine- ing, statistical analysis, and so on. The challengefor me has been to present uniform logical coverage of such a large area. In spite of its relatively shallow depth, it is intended as a graduate course. At its present state the amount of material is more thancan be coveredin a one-semestercourse (45h). Two one-quartercourseswould be more appropriate. Because of the breadth of the material, the sensor course has a somewhat unexpected but, it is hoped, bene?cial effect.