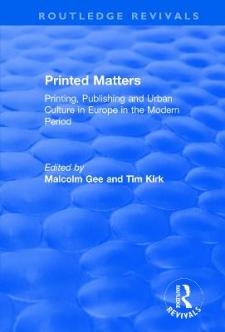 This title was first published in 2002: Since the invention of printing in the mid-fifteenth century the production, distribution and consumption of printed matter have been the principal means through which new ideas and representations have been spread. In recent times cultural historians have taken a growing interest in the previously somewhat isolated field of book history, shifting the study of printing and publishing into the centre of historical concern. This study of print and printing culture has naturally led historians to a concern with its urban context. The urban environment was fundamental to the development of printing from the outset, since it was in towns that the necessary combination of technical and entrepreneurial competencies were located, and where a growing demand for printed texts was to be found. Print permeated the urban experience at every level, and formed the chief means by which its ideas, values and beliefs were exported to the rest of society. In this way print promoted the broader urbanisation of society, by spreading urban attitudes and ideas beyond the limits of the city.