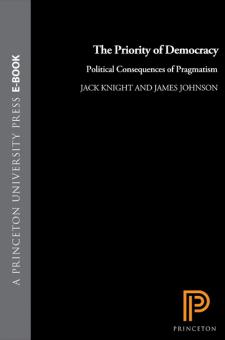 Why democracy is the best way of deciding how decisions should be madePragmatism and its consequences are central issues in American politics today, yet scholars rarely examine in detail the relationship between pragmatism and politics. In The Priority of Democracy, Jack Knight and James Johnson systematically explore the subject and make a strong case for adopting a pragmatist approach to democratic politics-and for giving priority to democracy in the process of selecting and reforming political institutions.What is the primary value of democracy? When should we make decisions democratically and when should we rely on markets? And when should we accept the decisions of unelected officials, such as judges or bureaucrats? Knight and Johnson explore how a commitment to pragmatism should affect our answers to such important questions. They conclude that democracy is a good way of determining how these kinds of decisions should be made-even if what the democratic process determines is that not all decisions should be made democratically. So, for example, the democratically elected U.S. Congress may legitimately remove monetary policy from democratic decision-making by putting it under the control of the Federal Reserve.Knight and Johnson argue that pragmatism offers an original and compelling justification of democracy in terms of the unique contributions democratic institutions can make to processes of institutional choice. This focus highlights the important role that democracy plays, not in achieving consensus or commonality, but rather in addressing conflicts. Indeed, Knight and Johnson suggest that democratic politics is perhaps best seen less as a way of reaching consensus or agreement than as a way of structuring the terms of persistent disagreement.