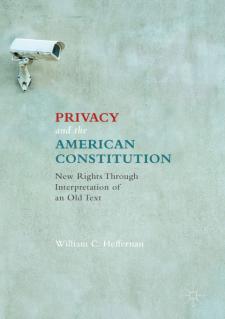 This book explains a paradox in American constitutional law: how a right not discussed during the ratification debates at Philadelphia and not mentioned in the text has become a core component of modern freedom. Rather, privacy is a constitutional afterthought that has gained force through modern interpretations of an old text. Heffernan defends privacy rights against originalist objections to its inclusion in modern constitutional doctrine, analyzes the structure of privacy claims, and provides a blueprint for protecting privacy against government incursion. The book will appeal to a wide audience of students and researchers of criminal procedure, constitutional history, law-and-society, and sociology of law. Lawyers will find this book extremely valuable in addressing the statutory issues associated with modern privacy law.At last, a book about constitutional interpretation that speaks plain English and makes sense.  It's the best work I know on the subject, yet that subject is not the one it's mostly about.  The book mostly tells the story of the constitutional right to privacy and how it emerged from provisions that at the outset were not much about privacy at all.  On that subject, the book is definitive.  It's also fascinating, probing, engaging, insightful, and wonderfully presented.  Privacy and the American Constitution is a stellar contribution to knowledge.Albert W. Alschuler, Julius Kreeger of Law and Criminology, Emeritus, University of ChicagoA powerful and innovate contribution to constitutional law.  Not only does Heffernan offer us a fascinating and persuasive account of how modern constitutional rights grew out of the personal space offered to us in an earlier era, he also explains why privacy rights deserve the newfound importance they have in our modern jurisprudence, based upon the same Madisonian approach to constitutional interpretation that justifies other central parts of modern constitutional law.Marc Jonathan Blitz, Alan Joseph Bennett Professor of Law, Oklahoma City University School of Law