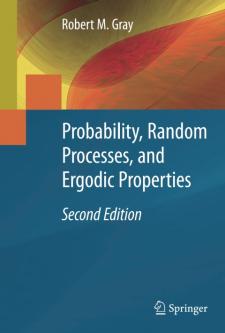 Probability, Random Processes, and Ergodic Properties is for mathematically inclined information/communication theorists and people working in signal processing. It will also interest those working with random or stochastic processes, including mathematicians, statisticians, and economists.HighlightsSecond edition of classic text Complete tour of book and guidelines for use given in Introduction, so readers can see at a glance the topics of interest Structures mathematics for an engineering audience, with emphasis on engineering applications. New in the Second EditionMuch of the material has been rearranged and revised for pedagogical reasons. The original first chapter has been split in order to allow a more thorough treatment of basic probability before tackling random processes and dynamical systems. The final chapter has been broken into two pieces to provide separate emphasis on process metrics and the ergodic decomposition of affine functionals. Completion of event spaces and probability measures is treated in more detail. More specific examples of random processes have been introduced. Many classic inequalities are now incorporated into the text, along with proofs; and many citations have been added. From the Author's Preface...This book has a long history. It began over two decades ago as the first half of a book on information and ergodic theory. The intent was and remains to provide a reasonably self-contained advanced (at least for engineers) treatment of measure theory, probability theory, and random processes, with an emphasis on general alphabets and on ergodic and stationary properties of random processes that might be neither ergodic nor stationary.The intended audience was mathematically inclined engineers who had not had formal courses in measure theoretic probability or ergodic theory. Much of the material is familiar stuff for mathematicians, but many of the topics and results had not then previously appeared in books. The original project grew too large and the first part contained much that would likely bore mathematicians and discourage them from the second part. Hence I finally followed a suggestion to separate the material and split the project in two. The resulting manuscript fills a unique hole in the literature. Personal experience indicates that the intended audience rarely has the time to take a complete course in measure and probability theory in a mathematics or statistics department, at least not before they need some of the material in their research. I intended in this book to provide a catalogue of many results that I have found need of in my own research together with proofs that I could follow. I also intended to clarify various connections that I had found confusing or insufficiently treated in my own reading. If the book provides similar service for others, it will have succeeded.