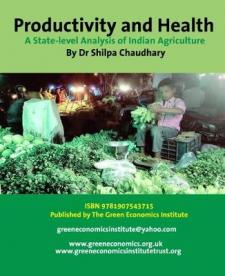 Productivity and Health: A State-Level Analysis of Indian Agriculture

1.1 IntroductionAgriculture provides a means of livelihood to a very large proportion of India's population. Agricultural prosperity is a pre-requisite for industrial growth, as well as overall GDP growth and for development. Generally, the years of bad agricultural performance have also been the years of slowdown in GDP growth rates. In light of the near-stagnation of the area under cultivation in India and limited possibilities of additions thereto, economists and policy makers have been forced to think of alternative means of raising production. A major post-Green Revolution policy, therefore, was to increase input intensity in agricultural production. While this has paid substantial dividends, it has its limitations in the long run. Therefore, one must seek other measures. The much-required increase in agricultural production can be achieved, at least partly, through an increase in total factor productivity. Although multiple factors lie behind this sought-after increase, investment in health is an important instrument to bring this about. Health is a fundamental human attribute, and to that extent a critical input into the production process.Each individual must have access to quality health care facilities, safe drinking water and sanitation facilities and a minimum level of food required to maintain good health.
The changing concept of development itself has brought health to the forefront of development strategy with the state of health becoming one of the criteria to judge the extent of development that has taken place.There have been some notable achievements in the health sector in India over the years in terms of an improvement in life expectancy at birth (from 37 years for males and 36 years for females in 1951, to 66 years for males and 68 years for females in 2011) and decline in infant mortality rate (from 146 per thousand in 1951 to 30 per thousand during 2009). However, there has been little improvement in the general health standards of the majority of the population. As a result of inadequate attention, Indian population continues to be exposed to high incidence of communicable but readily preventable diseases. India also performs dismally in the provision of basic facilities such as safe drinking water and sanitation facilities which influence hygiene and health of population.A healthy workforce contributes to productivity in several ways.For example: the workers can spend more time at work, they can perform more efficiently and faster, they have better educational attainments and skills, and resources do not get diverted from consumption or productive investment to medical care.
The causation also works in the reverse direction. A rise in agricultural productivity leads to enhancement of health status. Higher agricultural output and better agricultural practices are necessary to improve health by increasing supply of food, quality and nutrition of food, medicinal plants etc. The regions / individuals with low-incomes are trapped in the vicious circle of inadequate resources to invest in health care on the one hand, and poor health in turn constraining income-augmenting activities on the other.Even though good health is an essential pre-requisite for raising agricultural productivity and economic development, it has never got its due place in the spheres of policy-making as well as resource allocation. Spending on health is a productive investment.The fact that there is minimal government spending on health in India, less than 2% of GDP, brings out the lack of importance that has been attached to one of the basic aspects of human life.The low priority attached to health over the years is definitely a matter of concern.This book attempts to study the relationship between agricultural total factor productivity (TFP) and rural health for fifteen major states of India for the years 1983-84 to 2005-06.
The time period is chosen subject to data availability for the labour input (needed for constructing TFP index that is derived using NSS data) and health manpower (used in construction of multi-metric health index).The existing literature can be said to be deficient in establishing a definitive relationship between health and TFP in the context of Indian agriculture. Several studies either take health as a separate factor of production or take a restricted view of the impact of health on improving only labour productivity. Although there are several studies that estimate a TFP equation, most of them ignore the health dimension.The studies that do take into account health as one of the regressors of TFP, lack in two major respects.First, health is not captured in its multi-dimensional spirit and few studies use multiple health indicators; and even in the latter, the coverage of the health dimension is far from comprehensive. Second, the relationship between health and TFP in most studies is assumed to be one-way, and the endogeneity issue is completely ignored. This book seeks to fill these gaps by: (a) Taking a comprehensive measure of the health status, i.e. a multi-dimensional health index.
(b) Capturing the 'total' impact of health on agricultural production process by taking it as a determinant of total factor productivity. This approach also has the additional advantage of providing a quantitative impact of improvement of health on TFP, which cannot be provided by the other approaches.(c) Recognizing that there exists a two-way relationship between the two variables of interest and hence correcting for endogeneity bias, by instrumenting health variable with its own lagged values, while estimating the TFP equation