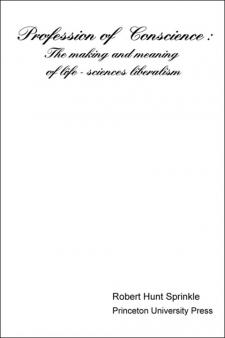 What happens to a profession that loses the memory of its moral independence? And what happens then to those reliant on its honor, its advocacy, its initiative? In an era of biotechnological adventure, medical audacity, ecological disruption, fiscal strain, and financial temptation, these are urgent questions for all life scientists and for all they serve.Profession of Conscience is an exposition, analysis, and application of a political-ethical tradition in, of, and for the life sciences, from molecular genetics to clinical medicine to environmental biology. The goal is avoidance of the fate of physics--the previous &quote;super science&quote;--whose technological transformations several generations ago so enhanced its political and economic value to governments, societies, and corporations that it lost control of its own conduct. Profession of Conscience discovers within the life sciences a long-evolving profession-specific standard for political action and activism, tracing it from conception in Hellenic and Roman imperial times, through birth and baptism in the Scientific Revolution, then through a naively optimistic adolescence in the nineteenth and early twentieth centuries, and finally into a self-conscious maturity, solemnized at the Nuremberg Trials but tested ever more subtly since, even down to the present day. The protagonist is a set of ideas. The product is &quote;life-sciences liberalism.&quote;