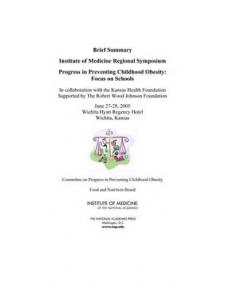 Obesity is now an epidemic among children and adolescents in the United States. Nationwide, roughly nine million children over six years of age are obeseaEURO"with elevated risks of both health conditions, such as diabetes and hypertension, and poor quality of life, possibly throughout adulthood. The Institute of Medicine (IOM) report, Preventing Childhood Obesity: Health in the Balance, was released in September 2004 and identified promising approaches for obesity prevention efforts and a set of recommendations for a variety of stake holders and sectors.

The IOM is building on its previous work by initiating a new study to assess progress in childhood obesity prevention efforts. In 2005, the IOM organized three regional meeting in the Midwest, South, and Western United States to galvanize obesity prevention efforts of local, state, and national decision-makers, community and school leaders, grassroots organizations, and industry including the food, beverage, restaurant, leisure, and entertainment industries. In collaboration with the Kansas health Foundation (KHF), the IOM held the study's first regional symposium in Wichita, Kansas on June 27-28, 2005. The symposium was structured to include three panels that focused on challenges and innovations for obesity prevention and school policies, school programs, and additional steps that can be taken by numerous stakeholders to overcome barriers to progress. Three break-out sessions focused on creating and strengthening linkages with other sectors to promote childhood obesity prevention including links between schools and home, community, and health care; links between schools and industry; and links between schools and the built environment.

This brief summary highlights the recurring themes for accelerating change and moving forward with obesity prevention efforts that emerged from the symposium; forge strategic partnerships; empower local schools and communities; educate stakeholders; evaluate obesity prevention efforts; document the benefits of obesity preventions; innovate to address barriers; use a systems approach; and develop a long-term strategic plan. The findings of this summary, along with those of two other symposia, and a more detailed discussion of insights and regional examples will be incorporated in the committee's final report that will be released in 2006.