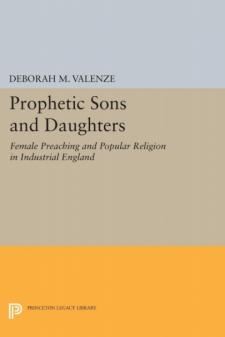 In a study important to the fields of women's studies and English literature, as well as to the religious and social history of Britain, Deborah Valenze argues the significance of a cottage-based evangelicalism that responded to the transformation of England in the nineteenth century. She goes beyond previous treatments of popular religion by offering a glimpse into the lives of humble people for whom a domestic form of religion became the focal point of daily activity. In addition, she opens up a hitherto unknown aspect of the history of nineteenth-century women by demonstrating the importance of working-class female preachers--vigorous ministers who risked their physical well-being and reputations by traveling widely on their own and speaking publicly to audiences of both sexes.Using local histories, memoirs, and the history of Methodist sectarianism to explore conditions confronted by evangelicals, Dr. Valenze concludes that cottage religion provided the basis for domestic and spiritual ideals of laboring families during a period of tremendous upheaval. She shows how this ideology enabled women to challenge the institutions and values of industrial society and to exercise their power in both private and public spheres.Originally published in 1985.The Princeton Legacy Library uses the latest print-on-demand technology to again make available previously out-of-print books from the distinguished backlist of Princeton University Press. These editions preserve the original texts of these important books while presenting them in durable paperback and hardcover editions. The goal of the Princeton Legacy Library is to vastly increase access to the rich scholarly heritage found in the thousands of books published by Princeton University Press since its founding in 1905.