Prospects for a Common Morality 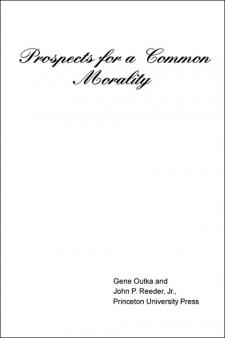 This volume centers on debates about how far moral judgments bind across traditions and epochs. Nowadays such debates appear especially volatile, both in popular culture and intellectual discourse: although there is increasing agreement that the moral and political criteria invoked in human rights documents possess cross-cultural force, many modern and postmodern developments erode confidence in moral appeals that go beyond a local consensus or apply outside a particular community. Often the point of departure for discussion is the Enlightenment paradigm of a common morality, in which it is assumed that certain unchanging beliefs inhere in the structure of human reason. Whereas some thinkers continue to defend this paradigm, others modify it in diverse ways without abandoning entirely the attempt to address a universal audience, and still others jettison virtually all of its distinguishing features. Exhibiting a range of positions Western participants take in these debates, this volume seeks to advance the substance of the debates themselves without prejudging the outcome. Rival assessments of the Enlightenment paradigm are offered from various philosophical and theological points of view. In addition to the editors, the contributors include Robert Merrihew Adams, Annette C. Baier, Alan Donagan, Margaret A. Farley, Alan Gewirth, David Little, Richard Rorty, Jeffrey Stout, and Lee H. Yearley.