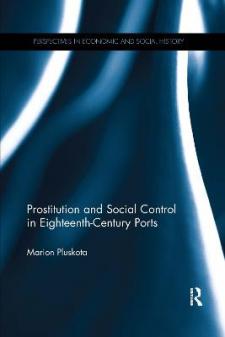 In the last third of the eighteenth-century, Bristol and Nantes were two of the most active commercial ports of England and France, despite a slowdown of their economy. Their economies were based primarily on the maritime trade, but they developed alongside Atlantic industries that attracted many migrants, both male and female, from the surrounding countryside and from abroad. The busy urban environment, the high number of sailors and single men migrating to the port, and the decline of female house based proto-industries, were factors encouraging the development of prostitution.

How prostitution is perceived in the context of social control and urban change is key to understanding the evolving attitudes to gender and sexuality in the eighteenth century. In this comparative study, Marion Pluskota offers an analysis of the lives of prostitutes that looks beyond a purely criminal perspective, and which encompasses their roles within their families, relationships and social networks. Using police and judicial records, she provides a valuable corrective to the narrow analysis of prostitutes in terms of immorality or deviance.

The unique forms of development and problems faced by port cities in the early modern period make them particularly interesting subjects for comparative history. This book is well suited for those who study social history, gender and women's history.