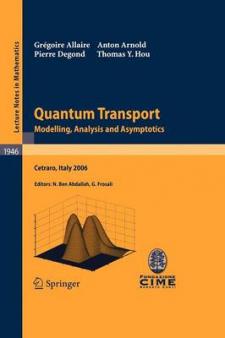 Downscaling of semiconductor devices, which is now reaching the nanometer scale, makes it mandatory for us to understand the quantum phenomena - volvedinchargetransport.Indeed,fornanoscaledevices,thequantumnature of electrons cannot be neglected. In fact, it underlies the operation of an increasing number of devices. Unlike classical transport, the intuition of the physicistandtheengineerisbecominginsu?cientforpredictingthenatureof device operation in the quantum context-the need for su?ciently accurate and numerically tractable models represents an outstanding challenge in which applied mathematics can play an important role. TheCIMESession"QuantumTransport:Modelling,AnalysisandAsy- totics", which took place in Cetraro (Cosenza), Italy, from September 11 to September 16, 2006, was intended both to present an overview of up-to-date mathematical problems in this ?eld and to provide the audience with te- niques borrowed from other ?elds of application. It was attended by about 50 scientists and researchers, coming from d- ferent countries. The list of participants is included at the end of this book.
The school was structured into four courses: ' * Gr' egoire Allaire (Ecole Polytechnique, Palaiseau, France) Periodic - mogeneization and E?ective MassTheorems for theSchr. odinger Equation. * AntonArnold(TechnischeUniversit. at,Vienna)MathematicalProperties of Quantum Evolution Equations. * Pierre Degond (Universit' e Paul Sabatier and CNRS, Toulouse, France) Quantum Hydrodynamic and Di?usion Models Derived from the Entropy Principle. * Thomas Yizhao Hou (Caltech, Los Angeles, USA) Multiscale Com- tations for Flow and Transport in Heterogeneous Media. This book contains the texts of the four series of lectures presented at the Summer School. Here follows a brief description of the subjects of these courses.