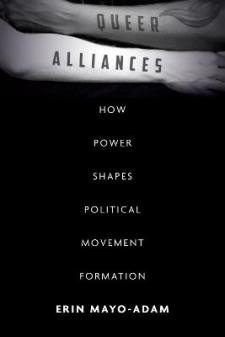 A unique investigation into how alliances form in highly polarized times among LGBTQ, immigrant, and labor rights activists, revealing the impacts within each rights movement.

In the early 2000s, the LGBTQ and immigrant rights movements operated separately from and, sometimes, in a hostile manner towards each other. Since 2008, by contrast, major alliances have formed at the national and state level across these communities. Yet, this new coalition formation came at a cost. Today, coalitions across these communities have been largely reluctant to address issues of police brutality, mass incarceration, economic inequality, and the ruthless immigrant regulatory complex. Queer Alliances examines the extent to which grassroots groups bridged historic divisions based on race, gender, class, and immigration status through the development of coalitions, looking specifically at coalition building around expanding LGBTQ rights in Washington State and immigrant and migrant rights in Arizona. Erin Mayo-Adam traces the evolution of political movement formation in each state, and shows that while the movements expanded, they simultaneously ossified around goals that matter to the most advantaged segments of their respective communities.

Through a detailed, multi-method study that involves archival research and in-depth interviews with organization leaders and advocates, Queer Alliances centers local, coalition-based mobilization across and within multiple movements rather than national campaigns and court cases that often occur at the end of movement formation. Mayo-Adam argues that the construction of common political movement narratives and a shared core of opponents can help to explain the paradoxical effects of coalition formation. On the one hand, the development of shared political movement narratives and common opponents can expand movements in some contexts. On the other hand, the episodic nature of rights-based campaigns can simultaneously contain and undermine movement expansion, reinforcing movement divisions. Mayo-Adam reveals the extent to which inter- and intra-movement coalitions, formed to win rights or thwart rights losses, represent and serve intersectionally marginalized communities-who are often absent from contemporary accounts of social movement formation.