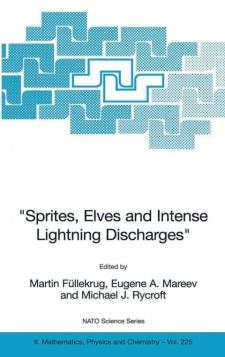 Particularly intense lightning discharges can produce transient luminous events above thunderclouds, termed sprites, elves and jets. These short lived optical emissions in the mesosphere can reach from the tops of thunderclouds up to the ionosphere; they provide direct evidence of coupling from the lower atmosphere to the upper atmosphere. Sprites are arguably the most dramatic recent discovery in solar-terrestrial physics. Shortly after the first ground based video recordings of sprites, observations on board the Space Shuttle detected sprites and elves occurring all around the world. These reports led to detailed sprite observations in North America, South America, Australia, Japan, and Europe. Subsequently, sprites were detected from other space platforms such as the International Space Station and the ROCSAT satellite. During the past 15 years, more than 200 contributions on sprites have been published in the scientific literature to document this rapidly evolving new research area. The need for international information exchange was quickly recognized, and sprite sessions became a permanent feature with a constantly growing number of contributions in the scientific communities of the American Geophysical Union (AGU), the International Union of Radio Science (URSI), the International Association of Geomagnetism and Aeronomy (IAGA) and the European Geosciences Union EGU).