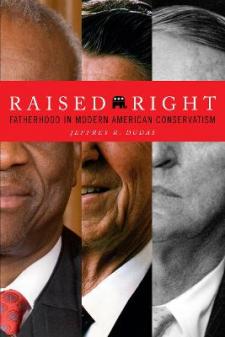 How has the modern conservative movement thrived in spite of the lack of harmony among its constituent members? What, and who, holds together its large corporate interests, small-government libertarians, social and racial traditionalists, and evangelical Christians?

Raised Right pursues these questions through a cultural study of three iconic conservative figures: National Review editor William F. Buckley, Jr., President Ronald Reagan, and Supreme Court Justice Clarence Thomas. Examining their papers, writings, and rhetoric, Jeffrey R. Dudas identifies what he terms a "paternal rights discourse"-the arguments about fatherhood and rights that permeate their personal lives and political visions. For each, paternal discipline was crucial to producing autonomous citizens worthy and capable of self-governance. This paternalist logic is the cohesive agent for an entire conservative movement, uniting its celebration of "founding fathers," past and present, constitutional and biological. Yet this discourse produces a paradox: When do authoritative fathers transfer their rights to these well-raised citizens? This duality propels conservative politics forward with unruly results. The mythology of these American fathers gives conservatives something, and someone, to believe in-and therein lies its timeless appeal.