Rambles in the South of Ireland during the Year 1838 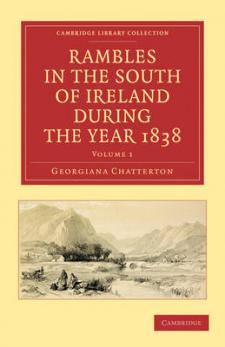 Lady Georgiana Chatterton (1806-1876) was a prolific British romantic novelist and travel writer. After marrying Sir William Chatterton in 1824 she spent much of her time at his estate in Ireland; the couple later retired to Dorset because of financial problems after the Irish Famine (1845-1851). These volumes, first published in 1839, contain Chatterton's accounts of various walks and excursions she undertook in the south of Ireland. Writing in the format of journal entries, Chatterton recounts her outings to places including Killarney, the Dingle Mountains and Limerick, mixing vivid descriptions of scenery and villages with details of local legends. These volumes were extremely popular and remain the best known of Chatterton's works; they provide a valuable example of popular early Victorian travel writing. Volume 1 contains her excursions to Bantry and Killarney. For more information on this author, see http://orlando.cambridge.org/public/svPeople?person_id=chatge