Reading the Diaries of Henry Trent 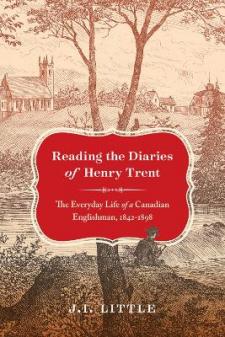 The personal journals examined in Reading the Diaries of Henry Trent are not the witty, erudite, and gracefully written exercises that have drawn the attention of most biographers and literary scholars. Prosaic, ungrammatical, and poorly spelled, the fifteen surviving volumes of Henry Trent's hitherto unexamined diaries are nevertheless a treasure for the social and cultural historian.

Henry Trent was born in England in 1826, the son of a British naval officer. When he was still a boy, his father decided to begin a new life as a landed gentleman and moved the family to Lower Canada. At the age of sixteen Trent began writing in a diary, which he maintained, intermittently, for more than fifty years. As a lonely youth he narrates days spent hunting and trapping in the woods owned by his father. On the threshold of manhood and in search of a vocation, he writes about his experiences in London and then on Vancouver Island during the gold rush. And finally, as the father of a large family, he describes the daily struggle to make ends meet on the farm he inherited in Quebec's lower St Francis valley.

As it follows Trent through the different stages of his long life, Reading the Diaries of Henry Trent explores the complexities of class and colonialism, gender roles within the rural family, and the transition from youth to manhood to old age. The diaries provide a rare opportunity to read the thoughts and follow the experiences of a man who, like many Victorian-era immigrants of the privileged class, struggled to adapt to the Canadian environment during the rise of the industrial age.