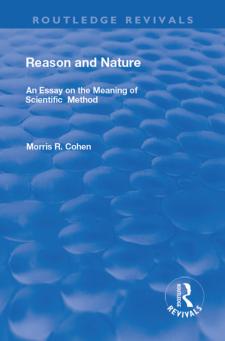 First published in 1931, this volume represents the culmination of twenty years’ of the study on the principles of science. Noticing a widespread craving for philosophical light at a time of scant such offerings, Morris R. Cohen aimed to demonstrate here the fundamental and ancient connection between nature and science - between hearts and minds – in an attempt to salve the developing mutual hostility between the two in the 1920s. The volume bears particular relation to George Santayana’s Life of Reason and Bertrand Russell’s Principles of Mathematics and explores areas including the character of the insurgence against reason and reason in the contexts of the natural and social sciences.